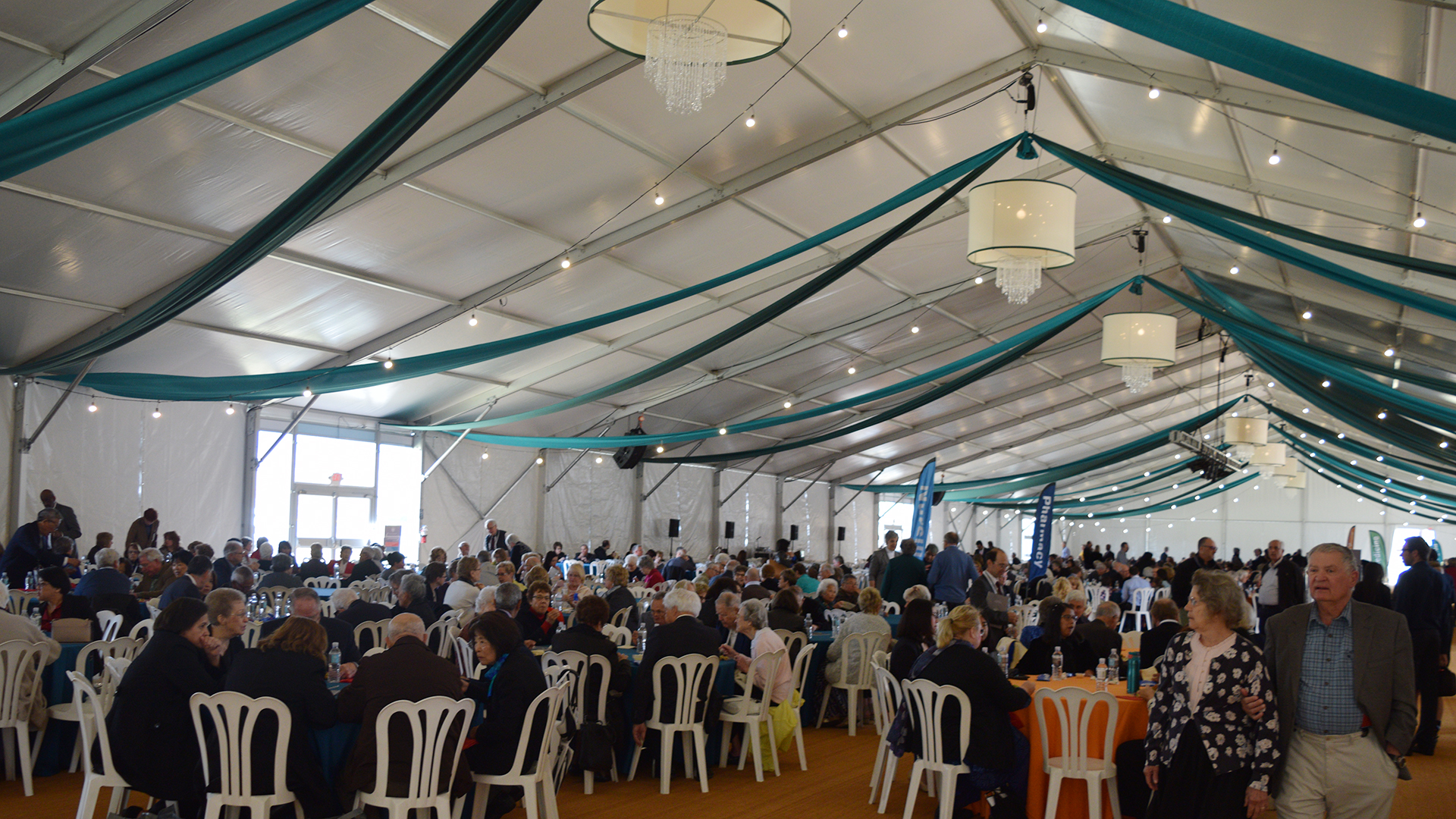 By Larry Kidder | The Big Tent helped to increase the available space for both the International Congress on Vegetarian Nutrition and Homecoming 2018. Scroll down for more photos.

The seventh annual International Congress on Vegetarian Nutrition was held Monday to Wednesday, February 26 to 28, primarily in Opsahl Gymnasium and Collins Auditorium. Nearly 700 individuals registered for the event, which significantly exceeded expectations. Close to twenty vendors were on hand to support the conference.

Loma Linda University Health’s own researchers were also well-represented, including Gary Fraser, MBChB, PhD, professor of medicine and epidemiology, Joan Sabaté, MD, DrPH, professor of nutrition and director of the Center for Nutrition, Healthy Lifestyle, and Disease Prevention, and others.

Sabaté, internationally recognized for his study of walnuts in particular, served as chair of the congress. Fraser first introduced research on the benefits of nuts to the diet back in the mid-1990s, discovered through findings of the Adventist Health Study.

On Tuesday evening, February 27, a large tent erected on Drayson Center’s superfield -- Loma Linda’s version of the Big Tent, served as venue for a banquet attended by close to 450.

Loma Linda University Health’s annual Homecoming 2018 took place March 1 to 5. Once again, Drayson Center served as the major venue for a number of alumni events. This is the second year Loma Linda University Health’s eight professional schools have collaborated to organize a campus-wide homecoming, with opportunities to reconnect with classmates as well as earn continuing education credits.

Saturday, March 3, began with the Parade of Flags and a focus on mission outreach, taking place during Sabbath School in Opsahl Gymnasium. A full church service followed, streamed live to the Loma Linda University Church sanctuary and via the Internet.

Alumni, families, and guests then headed to the Big Tent, stretching nearly 350 feet long by close to 100 feet wide, where they enjoyed a haystack lunch. Those unfamiliar with this dish will most likely identify with a Southwest-style tostada -- but with the uniquely Seventh-day Adventist twist of corn chips versus a corn tortilla. Variations of the haystack are limited only by one’s imagination. Close to 1,500 took part in the haystack lunch.

Saturday afternoon and evening provided alumni with more opportunities to reconnect and fellowship. On Saturday evening, a talent show featured students and alumni. Close to 1,000 attended this event. As a special treat, Kevin K.O. Olusola gave his first-ever solo performance following intermission. Olusola is best known for his role with Pentatonix, where he serves as beatboxer and singer with the world-renowned five-member acapella group.

On Sunday morning, beginning at 8:00 a.m., alumni and friends took part in a 5k fun run/walk, followed by a pancake feed at the Big Tent. Simultaneously, a pickleball tournament was held on Drayson Center’s recently painted pickleball courts.

With four permanent pickleball courts, as well as an additional 22 pickleball/tennis courts, Drayson Center is the largest pickleball venue on the West Coast. Negotiations are underway to host sanctioned events in the near future. 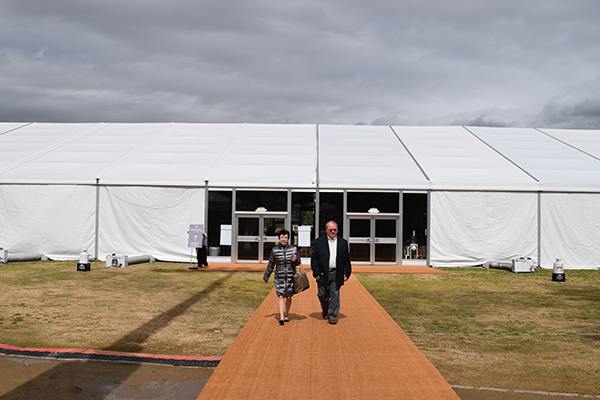 The Big Tent provided additional space for banquets and other activities, benefitting an overstretched Drayson Center. 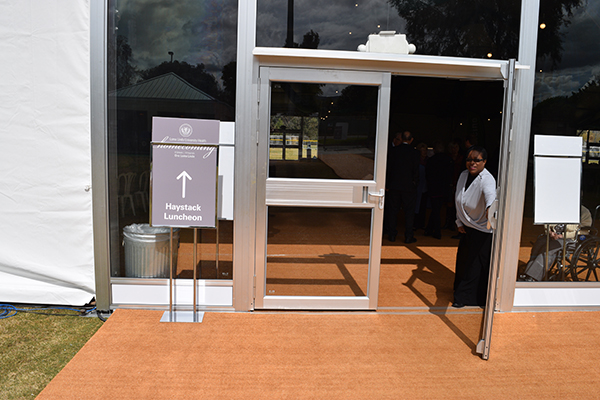 Alumni and guests were greeted by warmth on a cold, blustery day in Southern California, as well as food and friends. 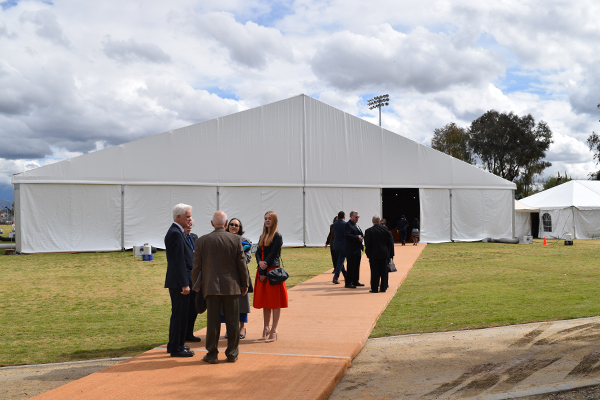 It wasn't a yellow brick road, but alumni had a dry walkway across a soggy field from Drayson Center to the Big Tent. 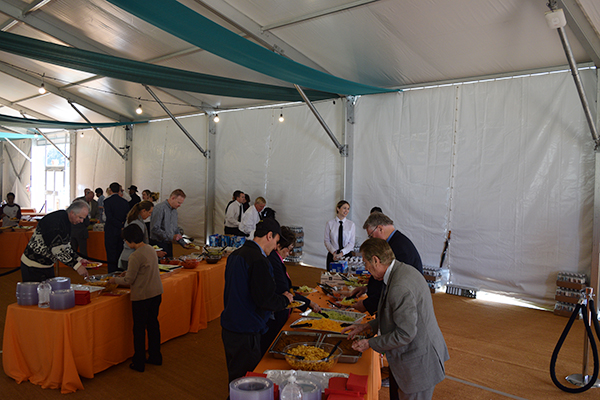 Close to 1,500 people were provided with the ingredients to make a haystack. This may have been a record, but no one from Guiness World Records was on hand to verify it. 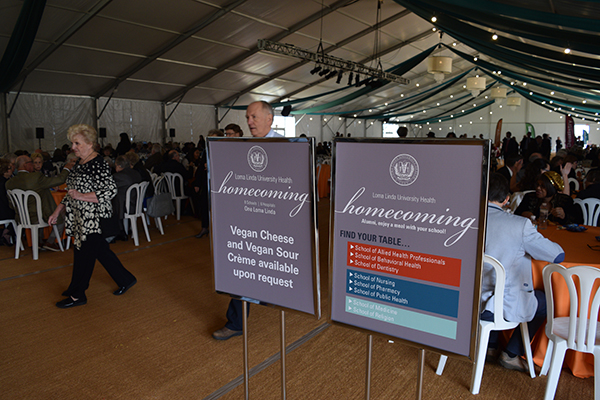 The cuisine and meeting areas for alumni were clearly marked.