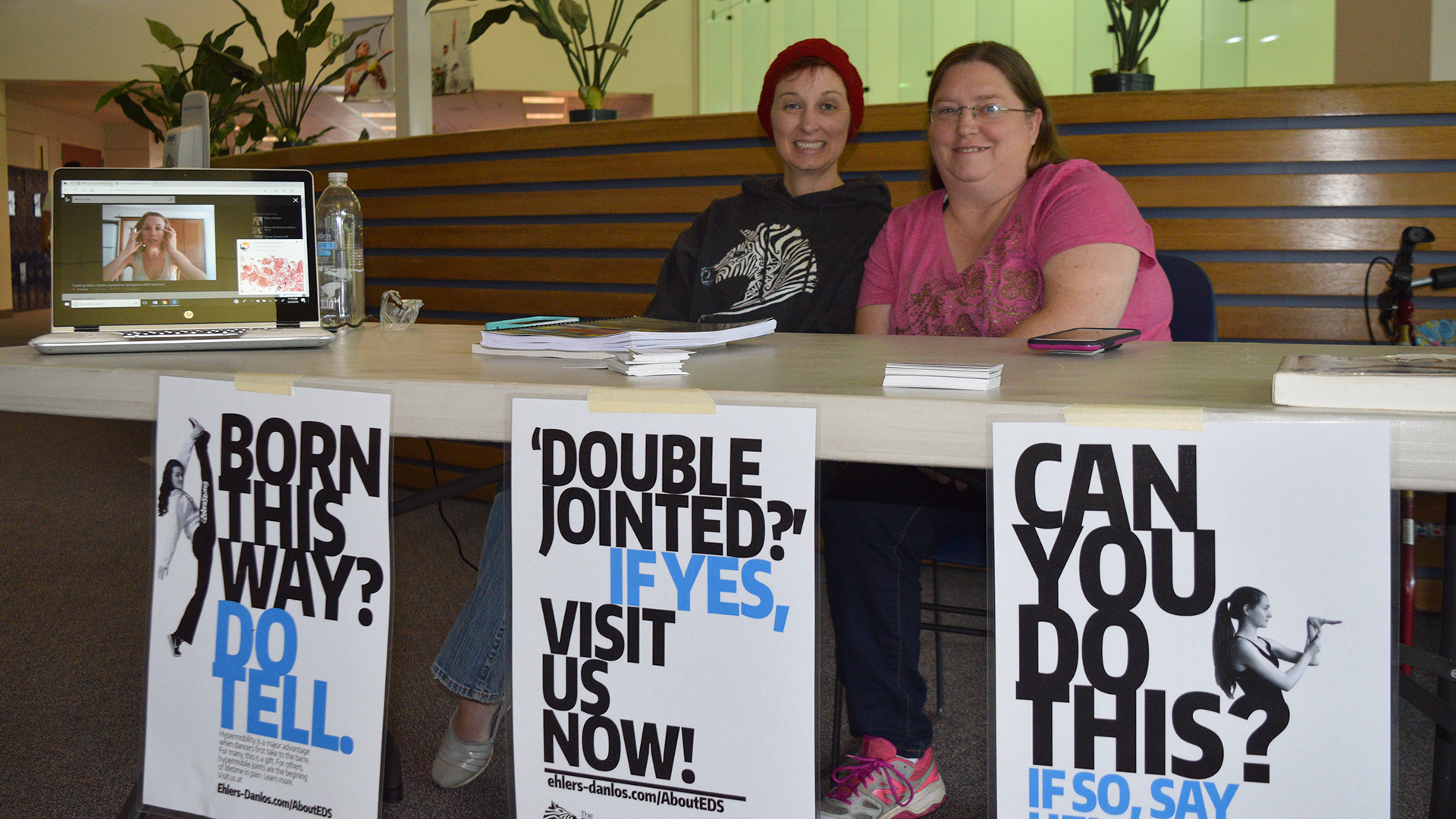 By Larry Kidder | Dulce Haviland, MA, MFA (left), and Evelyn Olive visited with Drayson Center members to raise awareness of Ehlers-Danlos Syndrome as part of Occupational Therapy Month 2018. Both have been diagnosed with EDS.

“EDS is a collection of chronic conditions related to faulty collagen production,” explains Haviland, a former English professor at Riverside City College, who recently lost her job due to the syndrome. “Those suffering from EDS are missing specific genes that regulate the body’s production of a protein known as collagen.”

According to the Ehlers-Danlos Society at www.ehlers-danlos.com, the more well-known forms of EDS affect the joints and skin. Joint hypermobility results in loose and unstable joints, which leads to frequent dislocations or subluxations (misalignments). EDS sufferers experience varying degrees of symptoms and pain.

Velvet-like skin that stretches a little too much, or tears or bruises easily is typical of a second form of EDS. Some cases of suspected child abuse have been resolved with a diagnosis of EDS.

Less common forms of EDS cause blood vessels, the intestines, or even the uterus in women to rupture. Scoliosis, scleral fragility (the eyes), mitral valve prolapse (the valve between the left upper and lower heart chambers fails to close properly), and overall poor muscle tone are other symptoms.

“Physicians know about EDS,” Haviland explains, “but they are told it’s very rare, so they don’t even consider it many times. It often takes years for EDS sufferers to be diagnosed.”

Haviland recalls her own childhood. “My first symptom was extreme light-headedness when I stood up quickly,” she shares. “I was only 6 years old and believed I was just imagining something was wrong, so I kept quiet.”

As she grew into her teens, joint hypermobility (where the joints move beyond the normal range) impacted her posture and even her ability to walk. After many trips to specialists and no definitive diagnosis, her parents began to doubt her complaints.

“It’s really difficult to hear people tell me, ‘It’s all in your head,’” Haviland points out. “When I was definitively diagnosed as an adult, my father apologized over and over for not believing me. But I even doubted myself.”

Evelyn Olive, a resident of Yucaipa, has experienced both similar and unique symptoms. “Every EDS person is a little different,” she explains, “which is one of the reasons EDS is hard to diagnose.” When EDS impacts the digestive system, individuals will simply not feel hungry for periods of time. In order to maintain adequate nutrition, Olive lives with a permanent feeding tube.

In addition, Olive has a niece and nephew for whom she serves as Mom; both inherited EDS. It has taken months and even years for them to receive a proper diagnosis. “The only way to properly diagnose EDS is with genetic testing,” Olive continues. “Some insurances just won’t cover the tests since treatment options are poorly defined.”

What are some options for treating EDS? “We rely on physical and occupational therapists for help,” Haviland details. “It is important to strengthen muscles to compensate for weak tendons and ligaments, as well as loose joints.”

Olive recently received two new knees because of the deterioration of her own knees. EDS has kept both women from holding regular jobs because of recurring and chronic symptoms.

Haviland suggests that individuals who resonate with the symptoms of EDS may need to insist that their physicians consider the possibility.

She also praises the benefits of mild exercise—especially water aerobics, as well as diet in relieving some of the symptoms and making the chronic disease more bearable. In 2013 and 2014, she taught Pilates at Drayson Center.

“I believe there are many individuals yet to be diagnosed,” Haviland asserts. “When medicine and research catch up, more treatment options should become available to EDS sufferers.”