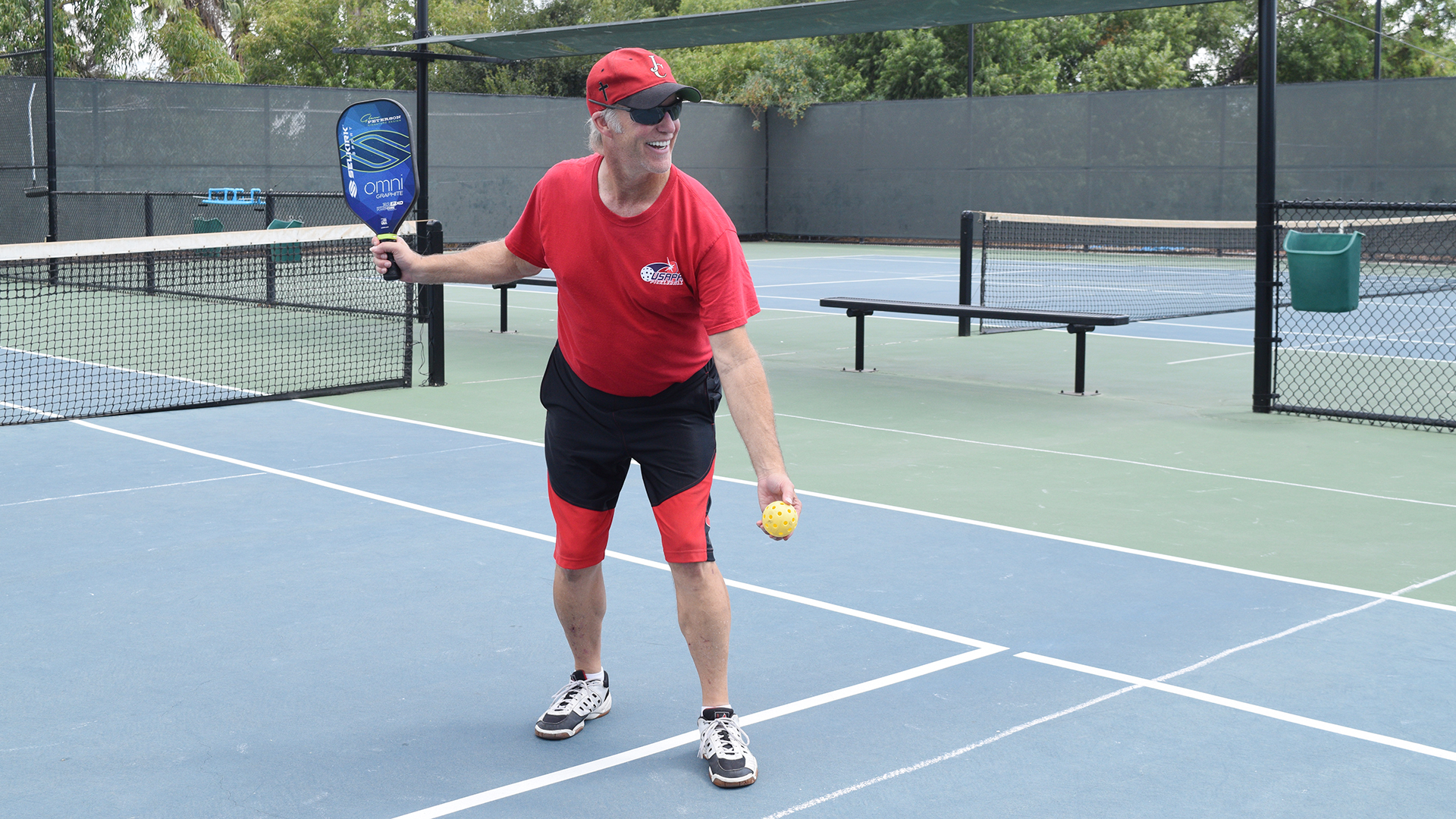 By Larry Kidder | San Bernardino County Park Commissioner Bob Mitchell has become addicted to pickleball. He enjoys it so much he plays most Tuesdays and Thursdays at both 7:00-9:30 a.m. and 7:00-9:30 p.m.

People of all ages, backgrounds, and abilities are converging on Loma Linda University Drayson Center to play one of the up-and-coming sports sweeping the U.S.—pickleball.

One of those individuals—Bob Mitchell—is particularly excited about the sport. Mitchell is a commissioner-at-large for the Regional Parks Advisory Commission. He comes to Drayson primarily on Tuesdays and Thursdays, playing with the senior pickleball program from 7:00 to 9:30 a.m. and in the evening with the regular group from 7:00 to 9:30 p.m.

“That’s a lot of pickleball,” Mitchell concedes. “But you can do it with this sport, whereas it would be a little too much if you were playing tennis or racquetball.”

With no advertising except word-of-mouth, the Loma Linda Pickleball Club is approaching 200 members, ranging in age from 20-somethings to 80-somethings. Ernie Medina Jr., DrPH, assistant professor in the LLU School of Public Health, has been leading the club since it began last July with just eight members. Eun-Hwi Cho, DDS, assistant professor of dental education services, LLU School of Dentistry, is one of his original group and now president of the club.

“Pickleball is great for all ages and levels of athletic ability,” Mitchell explains. “Since the courts are smaller than tennis, you can fit four courts on one tennis court.”

Pickleball courts are 44-by-20 feet—the same dimensions and lines as a badminton court. The paddles were originally made of wood but have evolved into graphite, aluminum, composite, or even carbon fiber. The paddle surface is set at 24 square inches and must meet a number of other requirements and restrictions, providing consistency to the game.

The game was originally conceived by four families who summered on Bainbridge Island in Washington state (see https://youtu.be/6kPJDi4LF1o). The Browns, Bells, Pritchards, and McCallums were all neighbors and spent most weekends together. On one typical summer day, it was raining off and on, and the kids were becoming restless.

Two of the dads found some ping-pong paddles, a plastic bat, and a whiffle ball, and suggested the kids go up to the old badminton court and burn off some energy. The dads lowered the net to ground level to make it easier to clear.

That was the mid-1970s. One by one, friends and neighbors were introduced to the game. “It was strictly for pleasure,” Barney McCallum explains. He found that ping-pong paddles were too small and broke too easily, so he fashioned the first pickleball paddles out of plywood with his band saw. Congressman Joe Pritchard, one of the dads, introduced the game to people attending his political rallies. Someone from the New York Times wrote an article.

As demand for pickleball kits suddenly took off, McCallum began mass-producing them—paddles, a whiffle ball, and a badminton net—and the rest is history.

Pickleball is ideal for those who find they cannot move as well as they used to. “That allows many more people to be involved in a racquet sport,” Mitchell points out. “The younger crowd seems to gravitate toward singles while the rest of us enjoy doubles. Pickleball is also an ideal sport for families to play together.”

Mitchell was a racquetball enthusiast before becoming smitten by pickleball. He now notices that racquet players from other games bring distinct skillsets with them to the pickleball game. “Tennis players tend to play with more topspin and have no problems with deep shots,” he observes, “while ping-pong players finesse the ball with spins and drop shots.”

The “kitchen”—as the no-volley area seven feet back from the net on either side is known—forbids players from hitting the ball before it bounces. The rule was added because Bill Bell, one of the original four dads, loved to run up to the net and “spike” the ball. To keep that from happening, it was ruled that Bell could only take the ball out of the air if he was behind the short service line on the badminton court—or out of the kitchen.

Other rules evolved as needed. For instance, the net was exactly the height of Joe Pritchard’s waist—36 inches (he would walk up to the net to check it before each match).

Mitchell was introduced to pickleball by a friend he met at Drayson Center’s spin class, Ilse Bent—who is in her 80s. “Ilse was the first one to invite me to try it out,” Mitchell remembers. “She loves the game and is an excellent player.”

As already mentioned, Drayson Center seniors play in the mornings on Tuesdays and Thursdays, and the rest of the club members play in the evenings on the same days. A third group of advanced players now meets on Sunday and Wednesday evenings.

“We have people driving in from Tustin and Los Angeles to play at Drayson,” Mitchell notes. “While the more advanced players are typically male, our club is blessed with a high ratio of advanced female players as well.”

Drayson Center is investing in pickleball in a major way. Court 2, the second tennis teaching court, will soon be converted to four permanent pickleball courts. The remaining courts, as well as the practice court, will be resurfaced and include pickleball lines, where portable nets can be easily set up and taken down.

When all is completed sometime in November, Drayson Center will have 26 potential pickleball courts, making it one of the largest pickleball venues in the Inland Empire.

“We hope to hold tournaments here in the future,” says Medina, the club’s founding director. “We are also planning to organize a number of events for young people to pull them into the sport.”

One member of the Loma Linda Pickleball Team is wheelchair bound. “It makes sense to me that wheelchair-bound individuals would gravitate toward pickleball," Mitchell reasons. "They have less area to cover than wheelchair tennis.”

“Pickleball is changing Drayson Center,” attests Donald Sease, MBA, director of Drayson Center. “I believe it will quickly become a great way for students, employees, family members, and the community to reach a new level of wholeness—and fun.” 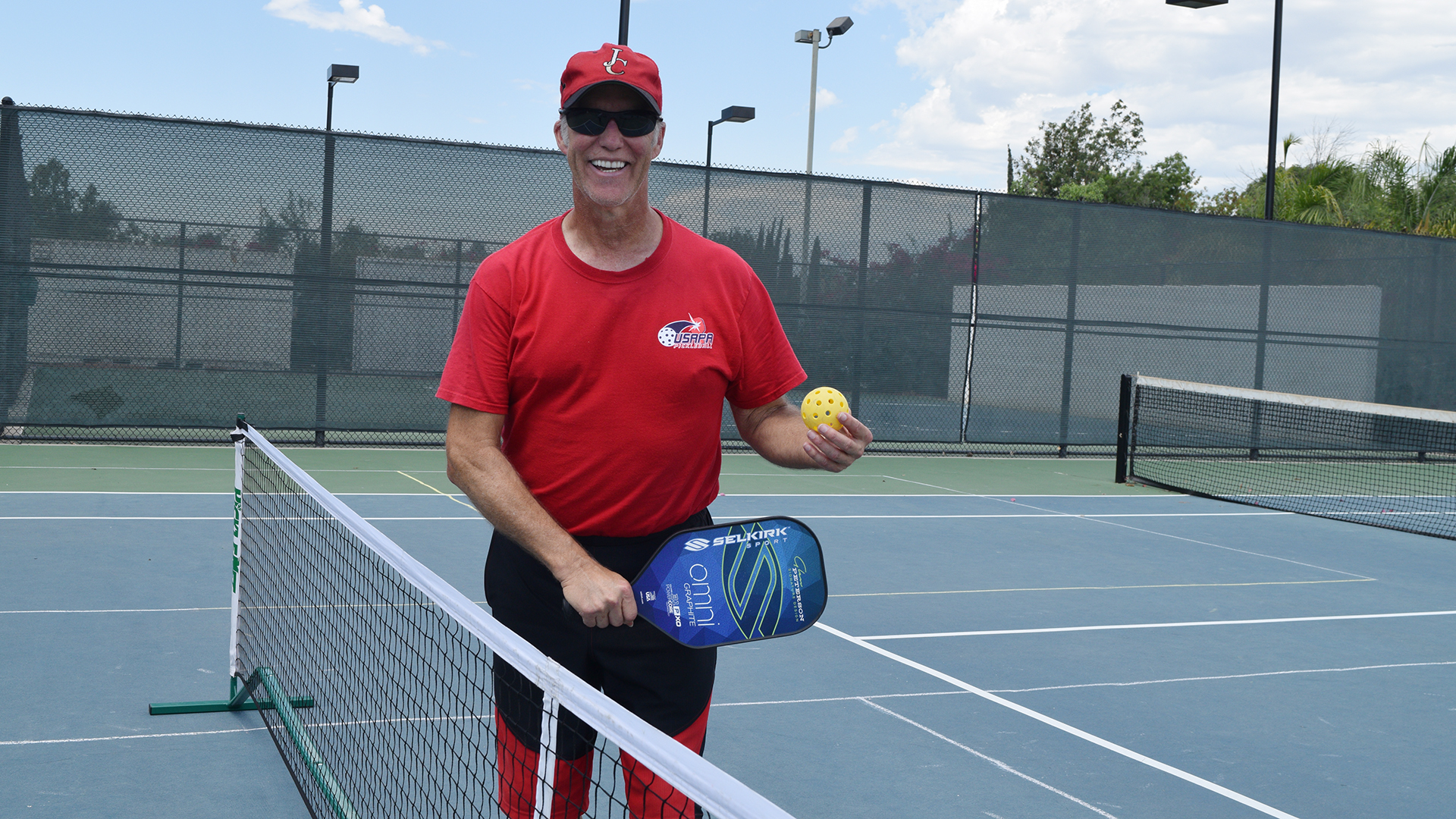